By bestJune 7, 2016Boxing Academy
No Comments

Maddie, only 12 years of age is definitely one for the future. 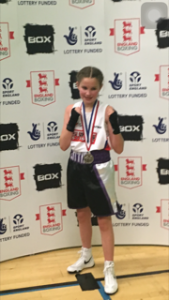 Paul Kershaw said “Her performance was a pleasure to watch and although the close decision went to opponent Libby Ellis, Maddie showed she will soon follow in the footsteps of our Academy’s England Champions Katie Guilier (former Bulmer), Laurissa Abdull, India Wilkinson and Millie O’Neil”.