April Ends with a Shower of Medals For St Paul’s

St Pauls Young Guns do us Proud in the Yorkshire Finals.

First up was Lloyd kemp fighting a skilful boxer from Hunslet gym. Lloyd boxed all three rounds very composed and cool to pick up a unanimous points decision.

Next up was Will Fethon and a strong Boxer from Tommy Coyles  gym, Will boxed a good strong pace picking his shots well and using great footwork to pick up another unanimous points win.

And lastly Joe Young boxed an undefeated boxer from ST Peters and proved to be a very close fight which was decided on the last round; the tempo Joe set dominated the last round to take a split decision.

Following on from fantastic wins for both Maddie Gittins and Ijaz Ahmend St Pauls have five Yorkshire champions this year who will be moving onto the pre quarters next week.

Head Coach, Mike Bromby said, “I couldn’t be prouder these young boxers have achieved so much for themselves, their families and the academy.” He went on to say “I also want to say a big thank you to Lynden, Darren and Tony who supported them on their journey”

Today saw the Senior Elite England finals taking place in London. Our very own Harvey Lambert boxed his way to the final where he found himself up against the England Number One, Harris Akbar.

Harvey put on a great performance and lost on a wafer thin decision to Akbar who is a former European Silver Medallist and World bronze medallist.

After the fight, Harvey said, “I was disappointed not to win, but he is a quality boxer and I think I did well”.

Mike Bromby Said, “Reflecting on a super weekend for our star Harvey Lambert, he had three fantastic performances against England’s best. He is a true role model who will reach the top in his chosen sport through his inspiring dedication and true talent.” 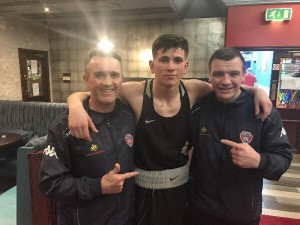